The Episcopal Diocese of Rochester, like all members of the Episcopal Church, employs a shared model of governance in which our bishop, elected and appointed clergy, and laity works together to discern God's plan for us in the region. Our vision is Joy in Christ, a way of life; our mission is to grow and develop congregations spiritually, numerically, and in missional leadership. We practice this through radical hospitality, thoughtful engagement, and passionate spirituality. Read more about us...

As chief executive of the Episcopal Diocese of Rochester, the Rt. Rev. Stephen Lane is responsible for guiding the Diocese towards its mission and vision. The bishop also serves as pastor to all clergy of the Diocese and shares, along with other judicatory heads, in seeing to the spiritual well-being of all people in the region. As a member of the House of Bishops, Bishop Lane participates actively in the leadership of the Episcopal Church.

Every year, the Convention of the Episcopal Diocese of Rochester meets to vote on the budget of the Diocese and resolutions related to the direction, growth, and life of the Church. Convention also elects members to the Diocese's elected governance bodies (see below). It is composed of lay and clergy delegates elected from every church in the Diocese.

Revised and adopted in the Conventions of 1952, 1954, 1955, 2012, 2015 and 2016 the Constitution & Canons establish the governance of the Episcopal Diocese of Rochester and define the Rules of Order for Convention.

Diocesan Council serves as the executive body of the Episcopal Diocese of Rochester between annual Diocesan Conventions and acts in accordance with the directives of the Diocesan Convention. Diocesan Council performs the work of the Diocese committed to it by Convention; assists the Bishop with new work between Conventions; formulates the annual budget as directed by Convention; establishes apportionment; organizes departments and determines their scope; and requests reports/statements from parishes and missions as needed. It is composed of elected clergy and lay members from the Diocese's districts, as well as at-large members who represent the entire Diocese.

Read more and see the roster...

The Standing Committee has several functions.  It acts as the Bishop's Council of Advice (Article VII.2); approves actions that encumber real property/equipment of the church; approves indebtedness for current expenses in excess of 20% of the previous year’s receipts for current expenses; approves requests to elect bishops; approves the election of bishops; and, approves candidates for Holy Orders. It is composed of four lay and four clerical members. The Standing Committee serves as the Ecclesiastical Authority in the absence of a bishop.

The Trustees hold the powers and duties granted to them by Section 5 of the Religious Corporations Law of the State of New York and are responsible for the prudent management of assets of the Diocese. Lay and clergy members comprise this body.

The Commission on Ministry (COM) is composed of elected and appointed clergy and laity primarily responsible for discernment with and formation of those in the ordination process for holy orders to the vocational diaconate and priesthood. It is also concerned with supporting the discernment of the ministry of all the baptized in our congregations. It addresses issues of formation guidelines, mentoring of newly ordained clergy, ongoing support and clergy wellness, deployment models, and administration of clergy continuing education grants.

District Deans, who are members of the clergy appointed by the bishop, liaise with Bishop Singh about needs and goals within their respective geographic areas. They communicate frequently with the bishop and his staff about strategic planning, district issues and pastoral needs. They also help guide pastoral development in their districts, working to foster mission and ministry, encouraging change and supporting congeniality in their districts. Deans help to build beloved community among the clergy and laity of the Diocese by creating prayer partnerships, hosting Bible study and providing pastoral care.

Legal Counsel to the Bishop: Office of the Chancellor

The Chancellor provides confidential or public advice on canonical or legal matters to the Bishop, Standing Committee, Diocesan Council, and Diocesan Convention at their request, but not to the Diocese or parishes. With this said, there are parish matters (approval of bylaw amendments) and Diocesan matters (review of resolutions) the Chancellor must review, and on a number of matters, at the request of the Bishop or diocesan staff, the Chancellor will advise the Diocese.

Complaints regarding the behavior of clergy are received by the Intake Officer of the Episcopal Diocese of Rochester. Depending on the circumstances, cases may be referred to the Diocese's Disciplinary Board or to the appropriate law enforcement agency.

Read more and file a complaint...

Deputies to the 81st General Convention

Eight deputies are elected every (3) years, (4) clergy and (4) lay
Duties include reporting back to the diocese as well as attending and representing the Diocese at General Convention held every three years.
The seniority of deputies is important in terms of the Convention committee structure. 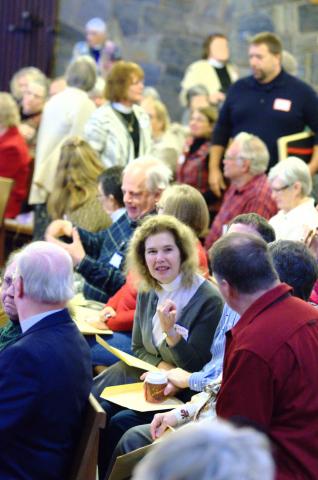